Recently we’ve heard a lot of trumped up talk about building walls. While we don’t get political here at The Fisheries Blog, we wanted to take this opportunity to highlight the trend of taking down walls, also known as dam removal. 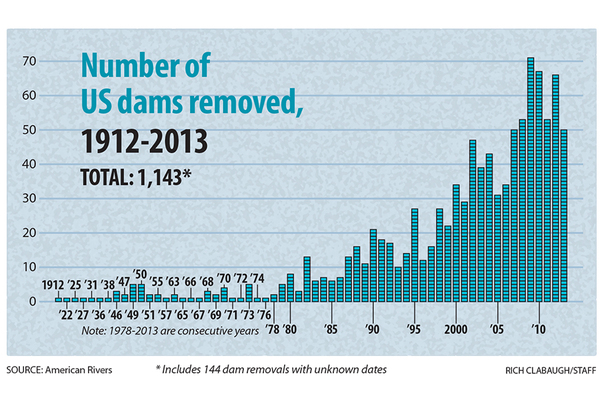 Dams are built for a lot of good reasons. Larger ones produce hydropower, and many help with irrigation, flood control, and produce recreational opportunities, among other benefits. We’ve also built a lot of dams. According to American Rivers:

“The US Army Corps of Engineers has catalogued at least 80,000 dams greater than 6 feet along the waterways of the United States – and at least tens of thousands of smaller dams pepper our rivers and streams. Secretary of the Interior Bruce Babbitt recently observed that, “on average, we have constructed one dam every day since the signing of the Declaration of Independence.”’

Unfortunately, dams also come with costs, both economical and ecological. Ecologically, dams change streams, and not only where they obviously stop-up the water, but also downstream where they alter flows, temperature, and other important aspects of fish habitat. Despite all the benefits of dams, we have seen tremendous loss of habitat for many diadromous fishes that are not full-time stream species, but use the streams for the connectivity to other habitats.

Economically, while some dams generate money, others do not (or no longer do) and like other parts of our aging American infrastructure, require resources to maintain. Often, when dams are no longer useful or become too expensive to maintain and repair, they are removed. And dam condition and maintenance is not only an American issue—just in the past few days the alarm has been raised in Mosul, Iraq where the Mosul Dam holds the potential for “a humanitarian catastrophe of epic proportions.”

Although the number of active dams still far outweighs the number of dam removals, things have changed in recent years. Starting around 2000, dams began to be removed at a greater rate than they were being constructed. Partly, fewer dams are bring built, but stakeholders are also seeing the value in removing aged dams; over the last 5 years an average of 50-70 dams are removed per yer, many along the east coast (which is where some of the oldest dams are located).

Be sure to check out this fascinating timelapse video of the Elwha Dam being removed.