Out to burst the bubble of Disney enthusiasts everywhere comes the revelation that Flounder of the Little Mermaid might have been an XX-male fish.  It’s not just Nemo who is deceiving you!  Then again, the fish named Flounder in the cartoon has no real resemblance to an actual flounder or any other flatfish.

Southern flounder (Paralichthys lethostigma), like many flatfish, have a critical window during the juvenile stage when sex can be reversed.  When southern flounder are between 35–65 mm, phenotypic sex is determined. This means:  if flounder are genetically male (XY) they stay male and develop as males.  However, genetically female flounder (XX) have plasticity and may develop phenotypically as females or males.  Under good conditions, the flounder develop as female.  Under poor, stressful conditions the flounder become sex reversed XX-males.

It is believed they do this because it is energetically less costly to be a male than to be a female, who have higher growth rates and must produce eggs.  The XX-males grow just like normal males and produce sperm (as seen in captivity), it’s just that they can only contribute “X” chromosomes to the next generation.  Unlike clownfish, once sex is determined during this window it is locked in, flounder do not change sex later in life.

So what’s the big deal?  A few more males in the population, so what? More choice right?

In any population, throwing off the sex ratio can be detrimental for population growth and sustainability.  Generally females are needed more as each female produces fewer eggs than a male counterpoint can produce sperm.

In southern flounder populations, the additional twist of sexual dimorphism makes a more male skewed population have greater negative effects.  Female southern flounder grow faster and larger than males.  Thus the fishery (both recreational and commercial where applicable) consists almost solely of female fish.  In many states, to take home a legal sized fish is to take home a female fish, as males do not tend to get longer than 12-13 inches, but regulations are set at larger minimum sizes in most of the range of Southern flounder (NC-15 in, SC-14 in, TX-14 in).  These limits are not meant to target females, but rather let them have one year of spawning before recruiting to the fishery.

For the first time we are testing the sex ratios of juvenile southern flounder in wild fish. Our current research captures young-of-the-year juvenile flounder after the period sex determination, but while they are still in the habitats they settled into and grew during the sex determination window.  This is key because we can monitor the water temperature and other environmental aspects of this habitat to be able to connect to the juvenile southern flounder.  At such small size, one cannot visually determine the sex of the flounder gonads, but we can test the gene expression levels of various hormones to determine the sex of these individuals.

Our recent studies in North Carolina of wild fish have shown a trend of masculinization of southern flounder in the mid-to-southern ranges of flounder in the state.  Water temperature records indicate these areas are just 1-2°C higher than the northern areas.  Thus, just small changes cause big results.  As water temperatures are predicted to rise 1-2°C due to climate change in the future. 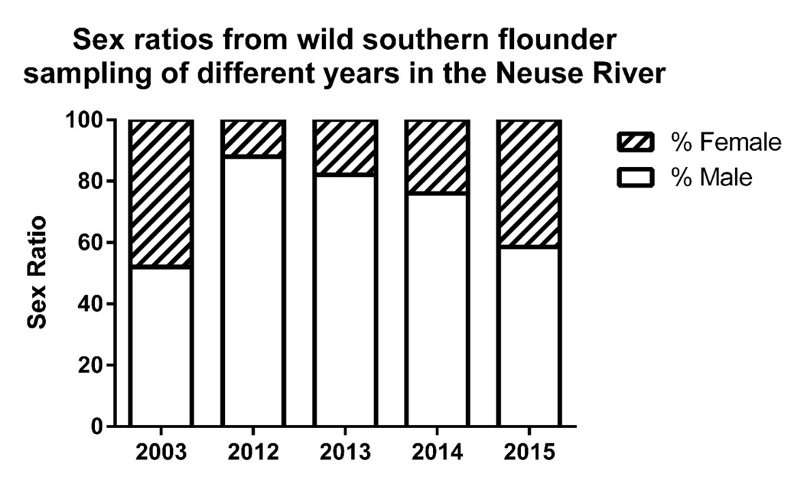 Interestingly, despite recordings of less than optimal temperatures for Texas southern flounder, limited sampling of wild caught flounder juveniles in the last two years have shown close to 50/50 sex ratios of juveniles through gene expression analysis of hormones produced by gonads.  This sampling covered only a small part of the Galveston Bay habitat, so we recommend more wide spread sampling before strong conclusions can be drawn.

This early detection is key to possibly be able to predict if a large or small year class of females will be moving through the ranks; which could possibly help managers in adaptive with management policies and inform population analysis.  Sex ratio information could help in classifying if particular places or habitats produce more females and thus should be higher on the priority list of protection and preservation.  In other places, such as Texas, where a flounder stock enhancement program exists, this testing can help guide areas as to where the flounder are being stocked.  We are also working with the stock enhancement program in Texas evaluating the sex ratios of their hatchery stocking fish to help develop best practices for potentially stocking the most female fish into the population.

So what does this mean?  States still report that females dominate the adult population despite our studies showing skewing towards males in the juvenile stage.  So are males having differential (and less) survival to adulthood?  Or are they congregating in a completely different area than other females?  Either could be true.  Though much of the data about flounder population sex ratios is older or potential biased by where fish are collected.

What happens if we get a decreasingly male population?  Theoretically as long as high water temperatures or other stressors cause sex reversal and all XX population could continue with part of the population sex-reversing during the juvenile stage to fulfill the role of male producing sperm.

However, will this be enough to sustain the population over time?  If males do not survive as well as females (possibly due to slower growth even at a young age) would enough live through this critical stage to service the adult population?  In the lab, we have found that XX-males function the same as regular males, but does this hold true for fish in the wild?  Could the sperm they produce not really be up for the job?  All questions we hope to answer with future studies.

Clearly this is a subject to be watched.