We have all heard of Jelly Fish, but what about Peanut Butter Fish? 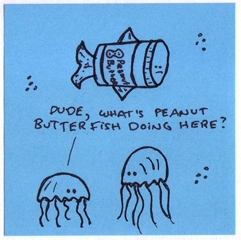 If you found a fish in your peanut butter, would you take the jar back and demand a refund, or would you dive right in and smear the tainted spread across your sandwich?  What about finding a fish in your yogurt, eggs, milk, or pasta?  Whether you knew it or not, you and millions of others worldwide are consuming fish while eating other products, yet few seem to notice.

Go to your pantry and grab any product that says “Omega”…Smart Balance and Jif are popular Omega fortifiers, as well as vitamin supplement companies.  Flip the product over and read the ingredients.  Do you see it?  Anchovy, Sardine, and Menhaden Oils.  Or my personal favorite: Tilapia Gelatin. 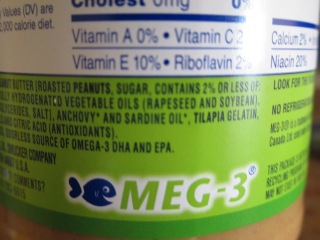 Why are fish turning up in these food items?  Possible health benefits have been associated with the consumption of Omega-3 fatty acids, and oily fish tend to be high in Omega oils.  Therefore, companies are now grinding up fish and putting them into the foods we eat.  Yet, questions still remain on the health benefits of these products, but recent research clearly states the negative impacts that the fish oil industry has had on the fish populations they exploit for these products.

Every year, millions of menhaden are removed from coastal waters, especially in the Chesapeake Bay, and put through a “reduction” process where they are boiled and turned into a paste.  These pastes are not only added to your food, but also to cattle, chicken, and swine feed.

The lone company producing vast quantities of this paste from menhaden fish is Omega Protein, founded by the 41st President of the United States, George Herbert Walker Bush.  Originally operating vast armadas of ships and spotting planes up and down the Eastern Seaboard, Omega Protein has fished itself out of all other states but Virginia. 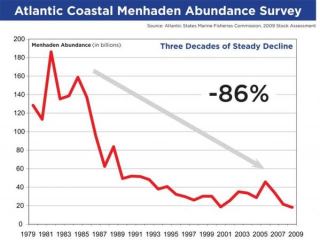 Menhaden once represented the most plentiful fish on the East Coast, and was declared by author Bruce Franklin as the “Most Important Fish in the Sea”.  Early settlers to the new world wrote of vast seas of menhaden, yet relatively few menhaden are found today.  Despite record low catches, menhaden still represent the largest fishery on the East Coast by weight…all caught by Omega Protein and kept available by its large network of lobbyists. 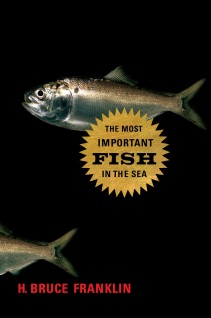 The Western United States witnessed the well documented collapse of the vast sardine populations a century ago (any visitor to the Monterey Bay Aquarium has set foot on the abandoned sardine canary row).  The same situation is currently being witnessed on the East Coast with menhaden.  Species that consume these vital links in the food chain also subsequently demonstrate declines.

The ecological benefits of menhaden are immense because they filter vast quantities of algae from estuaries and bays.  Both oysters and menhaden serve similar ecological roles, and both are in major decline, indicating a bleak future for the health of our estuaries should the current course of exploitation not be reversed.  But, change could be on the horizon.  The Atlantic States Marine Fisheries Commission will decide in December if changes should be made to the menhaden fishery.  Public comment on this important topic is available should you be interested in participating in the conversation.

So the next time you reach for an item in the grocery store, consider the source of those products and the long term ecological practices of the companies that produce them. 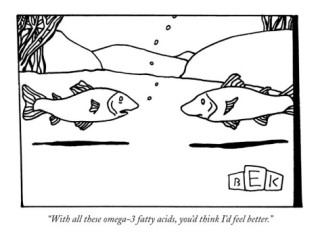