Do you often fall for farce over fact?  Take a quick look at the following fish stories and see if you can discern the real from the ludicrous.  Once you have decided on all 10, check out the answers towards the bottom.  Leave a note in the comments (or take the poll) and tell us how well you did at this little quiz.

1. Fact or Fiction: Native to the Amazon River, the long and slender Candiru Catfish swims up the urethra of unsuspecting swimmers before protruding its spiked fins to anchor itself from the oncoming flow of urine. Surgery could be required to remove the catfish from its new dwelling if it does not decide to immerge on its own.

3. Fact or Fiction: The sea cucumber is an unusual invertebrate that resembles a lumpy cucumber, and often has fish living in its anus. The foot long sea cucumbers keep their faces in the sand all day to filter food particles. Thus, without clean water at their mouth, they keep their anus up and breathe through their anus pore. Pearlfish are a long slender fish that have found the anus of sea cucumbers to be a perfect site to take up residence while out on the open sand flats. 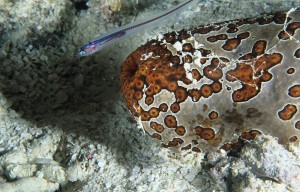 4. Fact or Fiction: Just recently, it was discovered that more than 180 fish exhibit a unique adaptation called biofluorescence. In the sea, where blue light penetrates to greater depths than other colors of light, fish are able to absorb and transform high energy blue light into lower energy colors like orange, red, and green to display vastly greater visual patterns than were previously thought. High intensity blue lights are now being used by SCUBA diving scientists with special cameras to see the incredible patterns of otherwise plain looking fish. 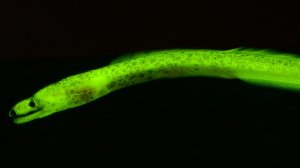 5. Fact or Fiction: This picture is hung in cafes throughout Southeast Asia, and is said to depict US soldiers in Vietnam in 1973 holding Naga, a fireball spitting serpent fish from Hindu beliefs. 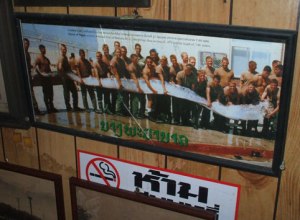 6. Fact or Fiction: A film maker recently developed several look-a-like cameras that resemble sea creatures in order to film fish, dolphins, and turtles in their native environments without being disturbed by humans. Spy Tuna, Spy Turtle, Spy Nautilus, and Spy Puffers are amongst the arsenal of life-like cameras. 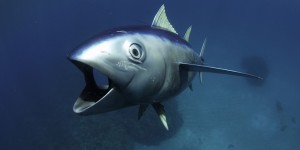 7. Fact or Fiction: That red snapper fillet you bought at the grocery store last week was probably a vermillion snapper, a smaller and less expensive snapper species. Mislabeling of fish at grocery stores and restaurants has become a major issue that not only hits consumers in the wallet, but also presents problems for environmentally conscience consumers and those with specific food allergies.

8. Fact or Fiction: Chilean Sea Bass were once called Patagonian Toothfish, and Orange Roughy were called Slimeheads, but these names were found to be less than desirable for marketing and sales.  Therefore, their names were distorted to make people want to purchase them for dinner.

9. Fact or Fiction: Steelhead testicles, squid lips, and fish assholes are a special delicacy in Russia that are more recently gaining unusual attention in Canada as ingredients for a concoction referred to as “Hotdogs of the Sea.” 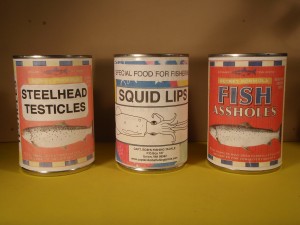 10. Fact or Fiction: There is worry that accidentally introduced carp species from Asia will make their way from the Mississippi River into the Great Lakes through a man-made canal and ruin the fragile environment and a $7 billion fishing industry. To minimize the chances of this happening, large electrical arrays were built along the bottom and side of the man-made canal to stop fish from swimming through, but still allow the continued passage of boats and cargo. 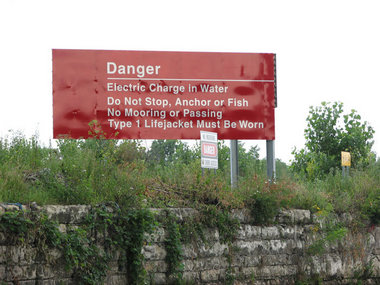 1. Fiction.  To this day, people continue to falsely tell the tale of the Candiru Catfish swimming up the urethra as a fact (including BBC and Animal Planet), whereas folks doing actual research have proven otherwise.  The catfish generally preys on the gills of other fish.  Recent research demonstrates that the fish does not key in on urea, as previously thought, but rather uses sight in order to find its victims.  While all previous accounts of fish going up human urethras are from stories or legends, and not from witnessed accounts, there is one recently “documented” account by a urologist, Dr. Anoar Samad, in Brazil doing surgery on a victim in 1997 who allegedly had a Candiru Catfish in his penis.  A fisheries scientist from the United States, Dr. Stephene Spotte, visited and interviewed the urologist in 1999 to determine if this story was true.  Dr. Spotte returned and wrote a book using facts and science to discredit the story of the urologist.  Namely, the size of the fish (width = 0.45 inches, length = 5.25 inches) and the physics (swimming against a strong flow), along with some incongruent storytelling, gave Dr. Spotte his conclusion that Dr. Samad was trying to gain attention rather than tell a true tale.  If anything, it appears that the fish has a much greater chance of swimming up other, larger human orifices.  Often, stories where male genitals are at risk take on a life of their own, like the testicle eating Pacus that were supposedly invading Denmark.

2. Fiction.  We love to believe stories of mythical beasts.  Unicorns, yetis, mermaids…the examples are countless.  In an unusual twist, the true story behind this fabrication is nearly as unbelievable.  On October 1, 2013, a real Giant Squid (Architeuthis dux) washed ashore in Spain measuring 30 feet long and weighing in at 400 pounds.  The following real image was altered and used in a recent fake news story that many folks believed to be true.

3. Fact.  According to studies, many pearlfish species live in a commensal relationship with sea cucumbers, where the pearlfish benefits by living in the anus of the sea cucumber, and the sea cucumber is unaffected (yeah right!).  However, some pearlfish, like Encheliophis chardewalli, add injury to insult, and snack on the sea cucumber’s gonads while taking up residence in the anus.  All of a sudden, a catfish up the urethra doesn’t sound so bad.

4. Fact.  Unlike bioluminescence where animals create their own light, like lightening bugs (fireflies) or deep sea fish, biofluorescence is the process where animals absorb light, transform it, and reemit it at a different wavelength, creating a different color.  This new discovery opens the pathway to discovering the costs and benefits for the organisms that utilize this mechanism.  Further study could put biofluorescence to work for humans, as well.  For example, researchers suggest that medicine could use biofluorescence to track the passage of drug compounds, such as in cancer treatments, through a patient’s body.

5. Fact.  While you may not have fallen for this one, many in Thailand continue to believe this tall tale.  Throughout Thailand, this picture is displayed in shops and cafes to dispel all doubts of the beast’s existence, when in actuality, the picture is of soldiers in San Diego holding a rarely seen oarfish that washed up on the coast of California in 1996.  More recently, two oarfish washed up on shore of Southern California, once again creating more questions than answers as to where they come from and how abundant are their populations.  As for the picture of the soldiers with the fish, it first showed up in a Navy publication, but how it made its way to Thailand with altered facts is simply part of the myth.

6. Fact.  A recent show called “Dolphins – Spy in the Pod” aired on BBC using these cameras to show the life of dolphins without human intervention.  Unfortunately for the Spy Squid, a raucous pod of male dolphins ripped it apart and sent it to the depths.  Considering the riveting images this technology provided, might we see further development to resemble other animals?

7. Fact.  Not a single sample out of 22 fillets purchased in New York, New Jersey, and Connecticut could be confirmed as Red Snapper in a recent study.  Rather, they turned out to be Ocean Perch and other types of snapper, like Vermillion Snapper.  Other studies have confirmed similar findings, with higher priced fish being replaced by less expensive fish, and sometimes replaced with species harvested less responsibly.  Scientists and markets are in the process of developing improved methods of tracking proper fish identification through to the consumer. 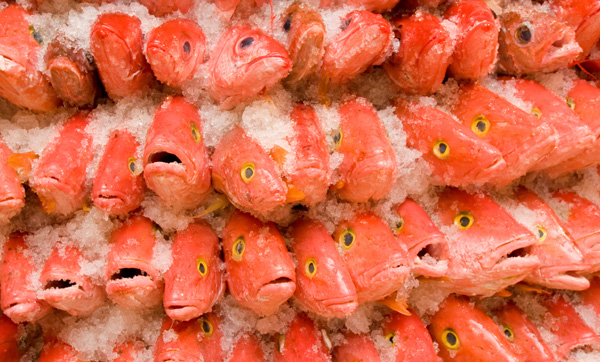 8. Fact.  When a new market of fish becomes available to the consumer, the name of the fish is important for marketing purposes.  The names of Chilean Sea Bass and Orange Roughy are considered more appealing than their counterparts of Patagonian Toothfish and Slimehead, respectively.  Now if only we could do something for the Blobfish.

9. Fiction.  These cans of unusual food items are just gag gifts people often purchase for friends on trips to places like Alaska.  In fact, it is rare for people to eat fish testicles, or milt as it is often referred to; however, it is not unheard of.  For example, it is eaten in several countries as a delicacy: Japanese eat Shirako (cod milt), Russians eat Moloka (herring milt), Sicillians eat Lattume (tuna milt), and Romanians eat fried Lapti (carp milt).  I also once met a crazy guy at a boat ramp in Florida who claimed he liked to eat the “white stuff” from a Striped Mullet, but I don’t think he knew it was milt.  Further, squid do not have lips, rather they have beaks, and many fish don’t actually have “assholes.”  Instead many fish, like Sharks, have a single hole called a cloaca.  This “orifice” is also commonly found in birds and reptiles, and is where all business is taken care of in one spot. 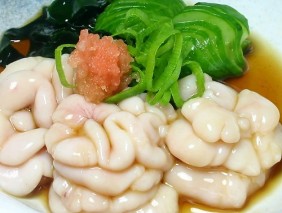 10. Fact. The Electric Fish Barriers are operated by the US Army Corps of Engineers to keep the Asian Carp out of the Great Lakes. This non-native species first escaped into the Mississippi River and have made their way up into the Illinois River. The Chicago Sanitary and Shipping canal is the only water connection from the Illinois River to Lake Michigan.

How many did you get right?