“Overall, they look less like a fish than a medieval dart”

“They’re like an alligator with fins instead of legs”

~Solomon David, describing a gar to just about anyone.

With descriptions like these, is it any surprise that gars (Lepisosteidae) aren’t the most popular fishes “in the sea?” Did I mention they’re armored with enamel-like scales and have jaws full of sharp teeth…and they can breathe air? What’s not to like?

While basic gar morphology hasn’t changed much since the Cretaceous period, our perceptions of gars have started to evolve over the past few decades. These once-hated fish are garnering an improved reputation in parts of their North American range. However, there’s still a lot of work to be done when it comes to conservation, restoration, and simply understanding these unique, “dinosaur” fishes.

This past August, at the American Fisheries Society annual meeting in Kansas City, researchers organized an entire symposium dedicated to gars and their “cousins”, the equally lowly-regarded Bowfin. Scientists, managers, and students came together to discuss the status and future of the holosteans (gars and bowfin). Participants identified knowledge gaps and research needs, but also shared an optimistic outlook for these ancient fishes in modern fisheries science.

Spinning off of the successful symposium, the Fisheries Blog asked if I’d write a post on my favorite fishes; the offer was made even fishier (in a good way!) by the awesome gartwork of Hannah Dean!

So let’s take a look at these medieval darts and learn some ganoid factoids:

The gargantuan member of the family, these “river monsters” can grow over 9 feet long and weigh over 300 pounds! Unfortunately they’ve been extirpated from much of their historic range due to habitat loss and eradication efforts. Fortunately, a regulated trophy fishery has been growing in popularity in the southern U.S., and restoration efforts are underway in several states. 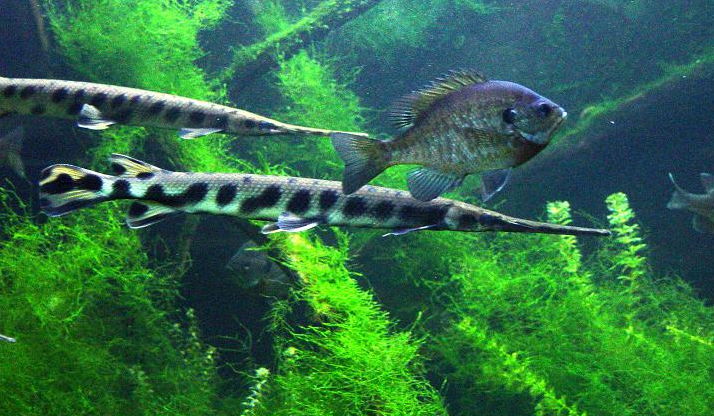 Probably the most commonly encountered of the family, and the one that represents that “medieval dart” morphology best. This species ranges from southern Canada to Mexico. They have a slim profile and slender jaws equipped with numerous conical teeth, making them quite effective at catching fish, their prey of choice.

Often with bright olive spots and preferring clear, vegetated waters, it’s the garish species of the group. Spotted Gars are now considered model organisms in genetics; new research has shown that they are a “bridge” between zebra fish (used in biomedical studies) and humans, and can therefore inform our understanding of disease and gene function.

Recent research has shown that this species actually selects for invasive Asian Carp in parts of its range. Preferring more riverine systems, it’s good to hear of a native species with an appetite for invasives! They are also one of the least-studied gars of the five species found in the United States.

Sister species to the Spotted Gar, this fish looks nearly identical but primarily resides in Florida. It is frequently seen in roadside canals, and much of the Everglades. It’s the most common gar in the pet trade, and often mislabeled as “Alligator Gar.”

Delicious! Although any gar species can be eaten*, this fish is eaten in parts of Central America the same way we eat salmon in the United States! In an effort to offset overfishing, Tropical Gars are being aquacultured for both food and restocking wild populations.

*Do not eat the eggs though! Gar eggs are toxic to mammals, birds, and most arthropods; but not to fishes. Weird right?

Last but not least, the most understudied gar, and unfortunately one of the most threatened by habitat loss; this enigmatic fish is only found in Cuba and nearby Isle of Youth. Fortunately, Cuban scientists are making efforts to conserve the species, such as projects at Zapata Swamp. We’ve even coordinated aquaculture research on the species here in the United States!

As you can see, for a family of only seven, ostensibly similar-looking species, the extant gars are unique fishes. Their lineage has persisted since the age of the dinosaurs, hopefully they will continue to do so on our watch as well!

About the author:
Solomon David, Ph.D.

An avid fan of “primitive fishes” and advocate for native species conservation, Solomon strives to effectively communicate science to both the research community and general public. He received his B.S. in Biology from Ohio Northern University, followed by an M.S. and Ph.D. from the University of Michigan School of Natural Resources and Environment. His graduate research focused on conservation ecology of Great Lakes fishes, including projects on Lake Trout, Chinook Salmon, and Spotted Gar. Solomon has also conducted postdoctoral research on sustainable aquaculture of air-breathing fishes and conservation of Great Lakes migratory fishes. He now serves as a research scientist focused on restoration of ciscoes in the Great Lakes, and ecology of gars and bowfins in Illinois.

About the artist:
Hannah Dean

Hannah Dean is an untrained artist whose main goal is to learn about nature and the nature of nature. She believes strongly in the value of connecting art and science. Cicero said, “art is born of the observation and investigation of nature” – and so is science.