A waterproof camera and snorkel gear should be part of everyone’s toolbox, especially fisheries professionals that rely on an array of techniques to collect data and communicate with the public. 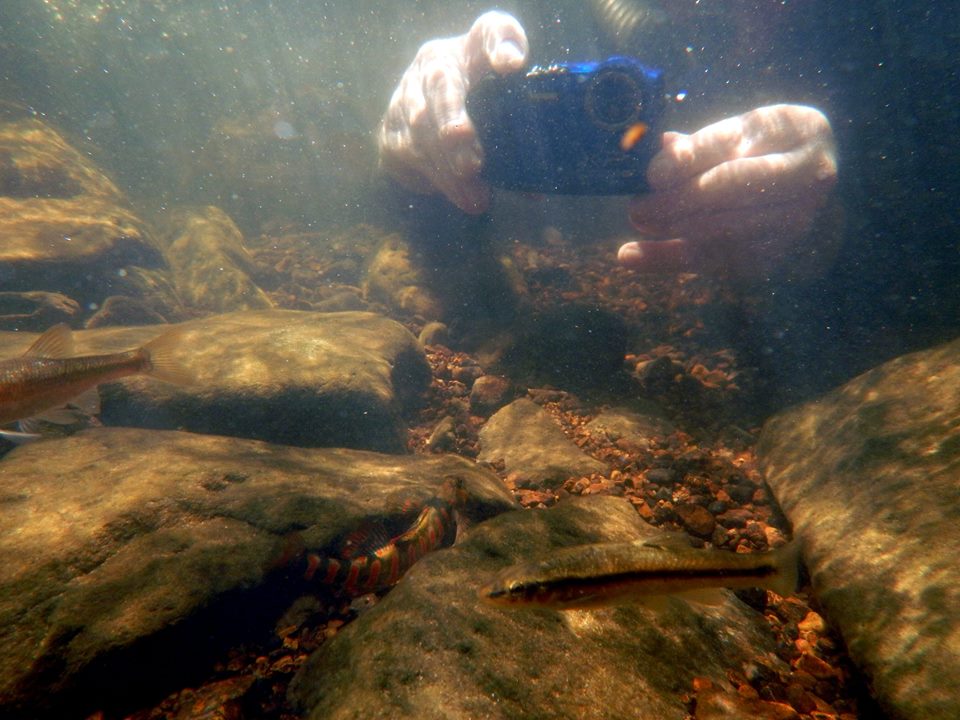 In the wake of rapidly advancing technology, our ability to capture the moment with a camera has become increasingly universal and sophisticated. In the last several years, manufacturers have begun making affordable cameras that are built to stand up to various abuses such as exposure to moisture, extreme temperatures, and impact.

While the art and science of underwater photography is by no means a new development, the ability to capture stunning images of life underwater has now become part of the mainstream when it was formerly but a rivulet.

First we should consider some reasons that a biologist might want to point a camera at a fish that’s still swimming free in the water. It’s pretty easy to understand the utility of something like, say, recording a video of behaviors of a nesting bass, but the possibilities extend far beyond that. While discussing uses in the world of research, the ability to capture photos or video while in the field doing snorkel surveys can be invaluable.

As an example of the value of having a camera handy, while working on a snorkel survey for rare darters in Virginia, I happened to take note of a Nocomis chub that somehow looked out of place. The fish happened to be residing in a deep pool under heavy canopy cover that made it so dark that still photography was impossible and I couldn’t see well enough to make a proper ID.

Instead, I was able to record a 10 second video clip which I then played back frame by frame until I got enough of a view to determine the identity of the fish. As it turns out, I’d made the first observation of an introduced population of Bluehead Chubs (Nocomis leptocephalus) in the upper Tennessee drainage in Virginia, and it quite possibly would’ve been missed altogether without a short video clip.

But hard work aside, fish are graceful, beautiful creatures. And especially here in the southeastern US, their vibrant coloration can rank them among the most beautiful vertebrates, comparable to tropical bird life. Why wouldn’t you want to take photos of stunning wildlife? Quality photos can be hung on the wall, used as computer backgrounds, added to presentations, social media, and even blog posts!

And this brings us to the main reason I spend as much of my time underwater as possible. The ability to bring a foreign world to people that would never see it otherwise is of crucial importance when it comes to conservation of aquatic species. We will forever be losing a fighting battle if we cannot get the general population to love and value our aquatic resources. As a longer-term goal for conservation, we really need to win hearts and minds.

Most citizens, including those that own property adjacent to streams, have no idea of the stunning diversity of sizes, shapes, colors, and fascinating behaviors that lie just on the other side of the surface film. And so I feel that it’s my duty, as an explorer of the aquatic realm armed with a camera, to share these wonders. In the age of social media, it takes but a few mouse clicks to bring the outdoors onto the computer and phone screens of people who might not ever know otherwise, so my goal is to spread the love as best I can, and we can all take part.

How to photograph fish?

To capture underwater moments, you’d need the right tools for the job. The equipment used varies with budget, purpose, and skill level, and can range from a high-tech DSLR setup with expensive housings and external strobe lights, down to self-contained rugged compact cameras that are capable and affordable, or even your smartphone (with waterproof case of course).

For most fledgling underwater photographers, one of these compact cameras will be plenty capable for your needs. Over the last several years the capability of these cameras has become quite impressive, and many major manufacturers such as Pentax, Nikon, and Olympus have great options available.

I cannot stress enough the importance of studying the manual for your camera. Learn the features and settings. Photograph on land to practice and learn the quirks and limitations of your machine. You will not regret any time spent photographing a bee on a flower or some similar small, fast target.

Underwater, in all but the most pristine springheads you might encounter, turbidity will limit your useful “range” to no more than a few feet, and with smaller targets, you will be entering the realm of macro photography, sometimes coming within a foot of your subject. Besides the satisfaction of photographing insect life or other small wildlife (after all, most of us got into this field due to a love of nature) this is invaluable practice for taking pictures of similar targets in an environment where the elements can fight against you at every turn.

If you don’t have the faintest idea what photography lingo means, don’t worry. The compact cameras all have “Auto Modes” that can work well for most situations. However, I’d suggest at least taking a few minutes to learn the basics about how shutter speed relates to ISO, and how exposure compensation and aperture work.

Typically, a slow shutter speed is your greatest enemy when it comes to taking a clear fish photo, so I usually decrease my exposure setting so that while I take a darker photograph, the fish is captured with minimal blur. Another asset is the ability of many cameras to shoot in “burst mode,” taking a rapid succession of photos if you hold down the shutter button. Especially for anyone aiming to capture high quality photos, burst mode drastically increases your chances of getting a photo with fins positioned optimally, as well as decreases your chances of having your shot ruined by a bit of sediment blurring across the face of the fish (a particular pet-peeve of mine).

Unless you desperately need to illuminate a fish to try to get an identification photo of something say, under a rock, you will want to avoid using the flash. Expensive external flash setups can properly illuminate fish, but the onboard flash on most cameras will only serve to highlight every single possible bit of particulate matter in the water.

Another great thing about modern cameras is their ability to capture incredible videos. In some situations, video is preferable over still photos and the flexibility to switch from still photos to recording video can be immensely useful. In addition to the ability to record interesting behaviors, video can sometimes be helpful for times when capturing a still photo is impractical. In situations where low light or a very fast fish can prevent you from getting a useful photo, video often outperforms still photos for the purposes of fish identification or survey work.

Where to photograph fish?

The question of where to photograph fish is moot if it is part of an existing planned survey, but for anyone specifically aiming to take good photos of a certain species of fish, water conditions are of the utmost importance. Shooting in already familiar watersheds can be best as it can be easier to predict water conditions, but looking at stream gauges and comparing flows to historic data can be useful.

Typically periods of low water are best for photographing fish since turbidity is at a minimum and often fish are more concentrated. Low flows also make it easier to hold steady in areas of current that might otherwise be prohibitive. While it may not be the case elsewhere, here in the southeastern US, rain typically ruins water clarity for several days afterwards, unless you can find a watershed that’s fully protected forest.

When the water looks like chocolate milk elsewhere, mountain streams in the National Forests or parklands are often still running clear. Also important is finding an area that has plenty of overhead light so your camera isn’t struggling to capture the image. Direct sunlight is typically best, though overcast days may also work for photography so long as tree cover doesn’t block too much light. And of course, to photograph your fish, you must first know it well enough to find it. It seems like this should go without saying, but it can sometimes be difficult to balance the requirements necessary to find both a good body of water to photograph in that also has appropriate habitat for the fish in question.

Part recreation, part art, and part science, underwater photography has the power to assist our research as well as serve as an irreplaceable outreach tool for conserving our aquatic ecosystems. It can be as easy as sticking a smartphone in the water, and powerful enough to change the way people see their local stream or river. I urge you all to consider capturing your next fish not with a net, electricity, or a hook, but rather with a camera.

Bio: Derek Wheaton is a biologist at Conservation Fisheries Inc. in Knoxville, Tennessee, where he helps propagate, reintroduce, and monitor rare fish species across the southeastern US. Previously, he worked as a nongame fish technician for the Virginia Department of Game and Inland Fisheries. He runs a social media outreach page called Enchanting Ectotherms on Facebook and Instagram, and serves on the Board of Directors for the North American Native Fishes Association (NANFA). He spends as much time as possible in the water, and when it isn’t possible, he tends to his numerous home aquaria.