Knowledge of two simple things could make the difference in the life of your dog: 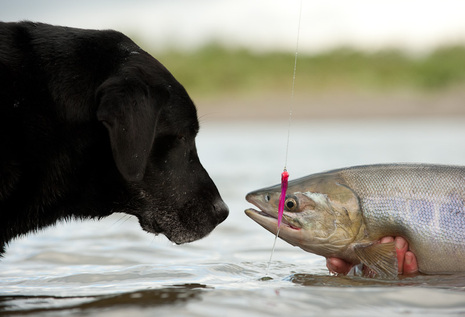 Can salmon kill my dog?

Consumption by dogs of raw or undercooked salmon from California, Oregon, and Washington can lead to canine death within 7 to 15 days.  This is caused by a naturally occurring bacteria, and not by improper handling by fish houses or from an environmental catastrophe.

Salmon Poisoning Disease is caused by a bacteria (Neorickettsia helminthoeca) that only afflict canines, including foxes, coyotes, wolves, and pet dogs.  The bacteria are delivered to the dog by a trematode, or fluke, called Nanophyetus salmincola (notice that the second part of the name refers to salmon).  This fluke has a complicated life cycle that relies on at least three hosts (see image below).  The first host is a snail called Oxytrema silicula.  The second host is a salmon (the flukes have also been found in other fish species and in Giant Pacific Salamanders).  Finally, a third host eats the infected fish and is thus infected by the fluke.  If a dog (or a fox, coyote, or wolf) is the third host, the bacteria attack the dog’s lymph system, eventually hemorrhaging many of the lymph nodes.  Death of the canine usually occurs within 10-14 days. 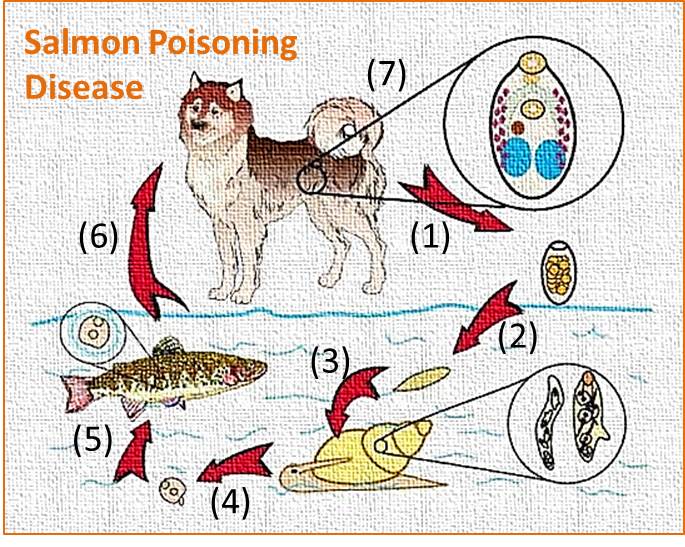 How can I tell if my dog has Salmon Poisoning Disease?

The onset of Salmon Poisoning Disease is generally about 6-7 days after initial ingestion of raw salmon.  Therefore, this infliction is generally difficult to diagnose if the veterinary professional is not informed about raw fish consumption.  There are several physical indications that your dog is suffering from Salmon Poisoning Disease.  These include loss of appetite, diarrhea, vomiting, nasal discharge, fever, twitching, and seizures.  If detected early, the disease can be treated with antibiotics and deworming medication.  Dogs generally show improvement within two days of treatment commencement.  In order to consider proper detection and treatment options, please consult with a veterinary professional if your dog comes in contact with raw salmon harvested from a river or stream in the Pacific Northwest.

Why does Salmon Poisoning Disease only occur in the Pacific Northwest?

Salmon Poisoning Disease only occurs in the Pacific Northwest because the host snail only lives in the Pacific Northwest.  The Oxytrema silicula snail is only found in coastal streams and rivers of northern California, Oregon, and Washington.  However, salmon can be found in the ocean outside of this region with the Salmon Poisoning Disease fluke.  Salmon can be infected with this fluke at a young age then carry the fluke in its tissue when it migrates to the ocean, therefore, an adult salmon caught in the Pacific Ocean could be a carrier.

What can I do to prevent my dog from getting Salmon Poisoning Disease?

There are several steps that can be taken to prevent your dog from getting Salmon Poisoning Disease.

Are there any known negative issues associated with Salmon Poisoning Disease for humans or fish?

While humans who consume raw infected salmon have been known to have intestinal issues caused by the fluke, they are not life threatening, and the bacteria that causes mortality in canines does not appear to have an impact on humans

Fish have been shown to have significantly diminished swimming speeds when initially infected with the fluke.  These slower swimming speeds have been attributed to lower survival rates of fish once infected.  There are thoughts that this could be hindering the recovery of salmon populations in parts of the Pacific Northwest, and several researchers are working on drugs at hatcheries to potentially eliminate the threat all together.

Don’t miss another weekly article from The Fisheries Blog: Enter your email in the top left corner of this page.