Perch, bream, and sunfish—same thing right? WRONG. Local names vary for these popular sport fishes, and this post is aimed to clear the water on such a confusing subject.

So just what is a “sunfish”?

Technically, a sunfish is any species in the freshwater fish family Centrarchidae (sin-tr-ark-i-day). These include black basses, rock basses, crappies, banded sunfishes, Flier, and “true” sunfishes.

More specifically, most fishes with the common name sunfish are members of the genera Lepomis (luh-po-mis) or Enneacanthus (in-ee-can-thus)—these are subsets of Centrarchidae. Sunfishes include species that are called by dozens of different common names throughout the US. 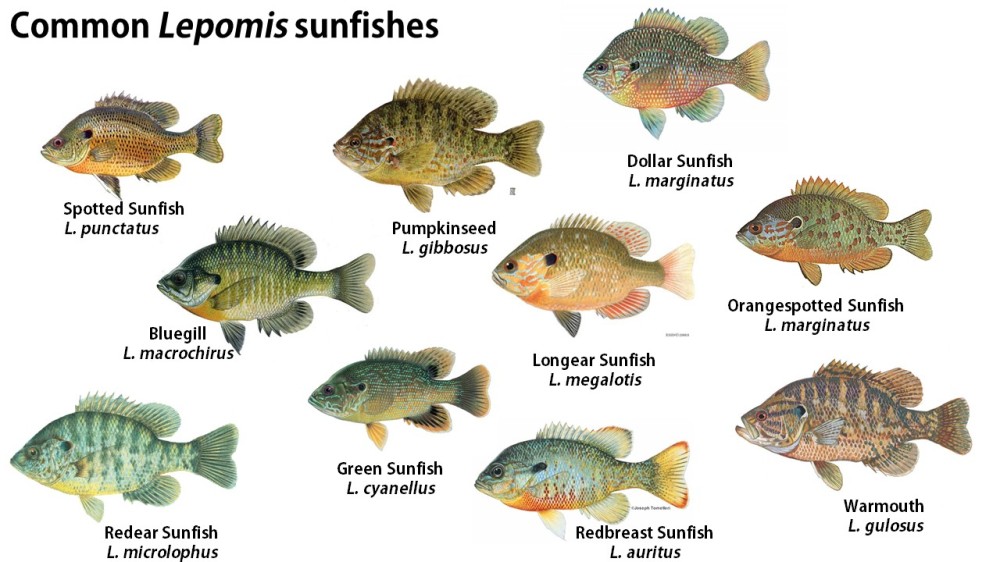 Bream vs. sunfish. In the US, bream (pronounced brim) is a common name that encompasses several of the larger Lepomis sunfishes. These usually include Bluegill and Redear Sunfish. Anglers often call the same species different names based on their life forms: large colorful males can be called bream, while smaller individuals of the same species are dismissed as perch, sun perch, or some other misnomer. This is particularly common in the Southern US, where many state management agencies manage all sunfish with the same regulations as simply bream. But don’t go to Europe and talk about bream fishin’ for Bluegill—there is actually an officially recognized species called Bream. It’s scientific name is Abramis brama, and it’s actually a species of minnow (yes, there are MANY minnow species, but that’s a subject for another article).

Perch vs. sunfish. One of the most common misnomers of sunfish is perch. If you want to see a fish biologist cringe, call a sunfish a perch. Sunfishes should not be confused with perch, which are actually members of an altogether different family: Percidae (purse-i-day). Perch species include Yellow Perch, Walleye, and darters. The common name perch is often applied to species in various other groups, which can make matters more confusing. For instance, White Perch is actually a member of the temperate bass family Moronidae (mo-ron-i-day) that includes Striped Bass and White Bass. Another one Surfperch, which is completely marine, and is a member of the family Embiotocidae (em-bee-o-toe-si-day).

It’s also worth mentioning that any given sunfish species can be called multiple common names that depend location or habitat. One sunfish with numerous aliases is Redear Sunfish (L. microlophus). Redear are sometimes called shellcrackers because of their affinity for eating snails, although some anglers reserve the term shellcracker for Redear/Bluegill hybrids. In other parts of its range, Redear are called stumpknockers because they prefer to dwell near woody debris, as opposed to the vegetation-loving Bluegill. However, Spotted Sunfish (L. punctatus) can also be called stumpknockers in the Deep South.

Green Sunfish (L. cyanellus) is another fun one. Where I grew up in Western Arkansas, Green Sunfish were called goggle-eye if caught in a creek, black perch if caught from ponds, and rice-slicks if caught as juveniles from flooded rice fields to be used as catfish bait. Of course, if it was big enough, it was called a bream. In fact, I never heard the term Green Sunfish until my sophomore year of college when I took Ichthyology.

Lastly, there are a few officially recognized species with the common name sunfish that are not in Centrarchidae. One is the Banded Pygmy Sunfish, which is in the family Elassomatidae (e-lass-o-mat-i-day). Another is the Ocean Sunfish (Mola mola), but honestly if you confuse this species with a freshwater sunfish…you need to just give up.

All images were retrieved from publicly-funded websites or common-license sources (e.g. Wikipedia)