I study salmon “on the fringe”. They are not part of the mainstream. They exist on the extreme periphery. They live in the Arctic. Specifically, the Canadian Arctic of the Northwest Territories. 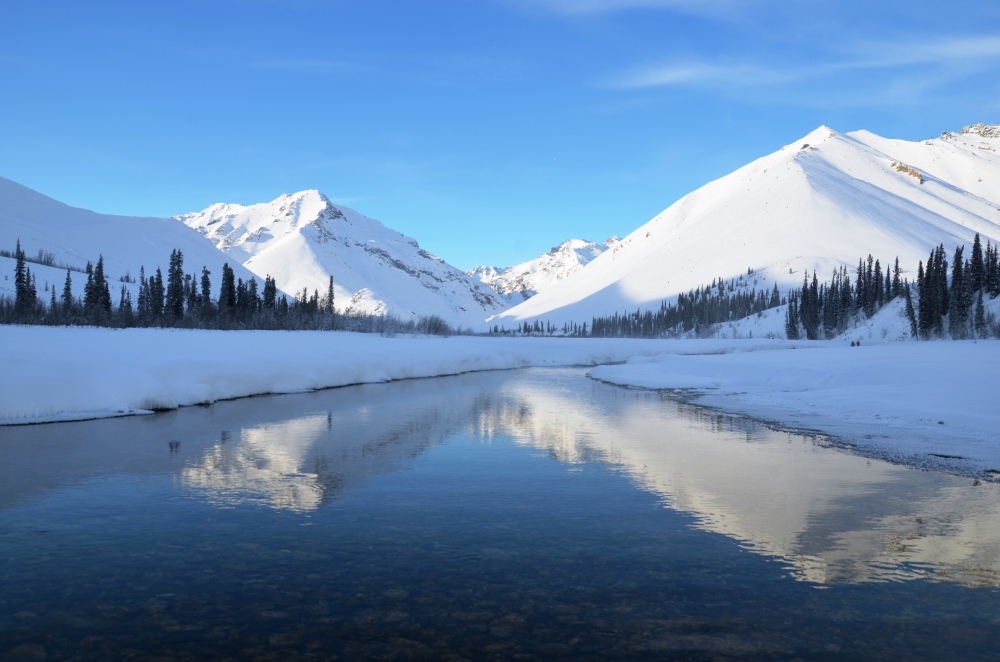 Naturally, Pacific salmons are primarily distributed in waters of the North Pacific Basin. In North America, this range currently extends from northern California to the northwestern margin of Alaska. Thus, salmon found along the northern coast of Alaska and eastward into Canadian waters are geographically marginal or peripheral. Key questions about these extreme salmon include: Are geographically peripheral salmon also biologically peripheral? If so, what role do these salmon play biologically, especially during times of great change in the environment?

In the Mackenzie River, which drains most of Canada’s Northwest Territories, Chum Salmon have been present for many generations, although in low numbers because of the periphery of this region to the salmon’s natural range. As evidence of their long yet peripheral presence, several of the local languages have names for Chum Salmon. More recently, increases in salmon abundance are happening and these changes were first noticed, recorded, and communicated by local subsistence fishers.

It appears that the Chum Salmon population(s) in the Mackenzie River are increasing in abundance, and perhaps also colonizing additional areas of the river basin. Moreover, the remaining four species of North American Pacific salmon (Chinook, Pink, Sockeye, and Coho) have now been caught in the western Canadian Arctic. And, there appears to be more and more salmon showing up overall, which is in sharp contrast to the declining abundances or extirpation of these five salmon species along their southern periphery in southern California and northern Mexico.

Atlantic Salmon populations are also recently yielding additional examples of range expansion into the Arctic. Atlantic Salmon were recently documented and harvested, although rarely, in the eastern Canadian Arctic, which is  north of their recent geographic range. A Pink Salmon was also recently caught in eastern Greenland. Perhaps these shifts and changes in salmon distribution and range are an indicator of changes to the entire Arctic ecosystem.  Perhaps these wandering salmon are responding to changing environmental conditions in their freshwater or marine habitats.

Changing abundances and ranges of salmon in the Arctic are seen by scientists as an indication of underlying changes in Arctic aquatic ecosystems. If these changes in fish abundance and distribution become permanent and established, they may result in the salmon further changing those ecosystems and impacting other native fish species, like char.

The salmon are wandering and looking for a place to spawn. Some may be finding new places with some familiarity. And some might be headed back to a home hidden in the vast Mackenzie River watershed. But the salmon are not lost.

I work with communities throughout the Canadian Arctic to document salmon harvests and combine this community-based monitoring with science to research range shifts and colonizations to the Arctic.

Those salmon on the fringe have a lot to teach about tolerances and adaptation; understanding them is key to predicting a future Arctic. This is why I research Arctic Salmon.

For more information, to follow progress, or to interact with the Arctic Salmon project, please visit www.facebook.com/arcticsalmon and www.arcticsalmon.ca or email Karen.Dunmall@gmail.com.

Please follow The Fisheries Blog on Facebook and on Twitter (@FisheriesBlog). Also, enter your email on the top left section of this page to receive an email of our weekly article on Monday mornings.

Karen is presenting her research about salmon colonizations and potential interactions with native chars at the 2014 American Fisheries Society conference in Quebec City in August, 2014. Her scientific presentation is currently scheduled for Thursday morning, August 21, 2014. Karen gratefully acknowledges financial support from a John E. Skinner Memorial Travel Award to attend the 2014 AFS conference.

Funding for the Arctic Salmon research has been generously provided by: Fisheries and Oceans Canada, University of Manitoba, Gwich’in Renewable Resources Board, Gwich’in Land Use Planning Board, Sahtu Renewable Resources Board, Government of the Northwest Territories through the Northwest Territories Cumulative Impact Monitoring Program (Project 00142), an NSERC Canada Graduate Scholarship, a W. Garfield Weston Foundation Award for Northern Research and the 2014 American Fisheries Society J Frances Allen Scholarship to KMD.